He is a week behind that is why

slarty wrote:I'll be offended if you think my utter bollocks are confined to this thread

slarty wrote:I'll be offended if you think my utter bollocks are confined to this thread

That is how it works on here

Tag Team Classic GW20
Groundhog week again...again...again. No change in position, but this time only two of the top four manage to beat the average score of 119.

But all was not tedium in the ring - spurred on by the grannies' brollies, it was a record-breaking and record-equalling week with two records tumbling and another being matched.

Talcy and Schlocky outdid last week's fourth-highest score by hitting the median effort this week. Spawny bastards that they are, their 124 was still enough to extend their lead thanks to pre-grapple nerves affecting the performance of their closest rivals. They end the week on 2403.

In third we have another pair of Mr Floppys, namely The Pigeon Bobbers. Last week's high-scorers failed to impress their octogenarian groupies, Sheffy's 49ing going down particularly badly. Their 107pts was the third-lowest and saw the gap to second extend to 47pts.

In fourth place we find the double record-breaking team of Devilsweep and Rinky. They beat the previous highest team score by two points and, in an effort worthy of Burke and Hare, Devilsweep snatched the highest individual score from Feets by eight points with a mighty 98. Their team score of 152 leaves them on 2312, just 23 behind The Pigeon Bobbers.

Next up we have Avit and Pottster with the second-highest team score this week. Their 134 was a fine performance, leaving them on 2271, but they could only look on from the grannies' pish-scented laps as the gap to fourth widened to 41pts.

Sixth and seventh spots see no change as both teams managed to hit the week's third-highest score of 133. Yep, four of the five above-average scores came from positions four to seven, the other belonging to the spawny bastards. Yani and Timmsy end the week on 2234 while Slarty and Viddleodge sit on 2219.

In eighth we have Mintman and Weeman with the second-lowest score of the week, their 106 leaving them on 2175.

Last up we have Clammers and Feets with the joint third-lowest and lowest individual scores of the week respectively. Feets' 18 managed to equal Talcy's Gameweek 8 performance, though rumours are rife that Talcy has demanded a Grannies' Enquiry. Their 70pts leaves them almost 200pts clear of their nearest rivals for the wooden umbrella on 1988.

tl;dr fk off ya lazy coonts

Apologies for the delay, I've been concentrating on breathing...I know, I know, no sense of priority

Tag Team Classic GW21
Yay! Movement in the table at last, but its amongst two of the duffers and mainly down to one of them having the week's lowest score. The top two both manage to beat the average of 109 and draw clear of third.

Talcy and Schlocky revived somewhat and managed the third-highest score of the week, 114, to leave them first on 2517.

Crompton and Rinky revived even better with the week's highest score, much aided by Rinky hitting the highest individual score. Their 130pt haul leaves them on 2512, just five points behind the leaders.

The Pigeon Bobbers remain in third with an almost average 108 to leave them on 2443.

After last week's double record-breaking effort, Devilsweep and Nuttie took a breather and settled for 99pts, leaving them on 2411.

Avit and Pottster hit the second-highest score of the week. Their 116pts draws the 17pts closer to fourth spot and sees them end the week on 2387.

Sixth spot sees the first movement for weeks and appropeiately enogh it's those two shits, Slarty and Viddleodge. However their good fortune wasn't down to their own efforts with Vid managing to get the lowest individual score this week, 38. A below-average 104 leaves them on 2323.

In seventh we have the week's big fuck-ups, Yani and Timmsy. Their 88pts was just enough to let them drop down a place and end the week on 2322.

In eighth we have Mintman and Weeman with the final above-average score. Their 113 leaves them on 2288pts.

Last up we have Clammers and Feets who couldn't sustain their wooden umbrella effort and were only the fourth-lowest scoring team this week. Their 107 propels them to the giddy heights of 2095.

Tag Team Classic GW22
Welcome to the buses. No movement for weeks and now we have two in a row and this time it wasn't amongst the duffers. Four teams managed to reach three-figure scores, with one coupon-buster amongst them. This brings us up to date until Monday night.

Crompton and Rinky hit the second-highest score this week and it was enough to take them back into first spot. Their 104 leaves them 19pts clear on 2616.

Last week's leaders, Talcy and Schlocky, could only manage a lowly 80pts with the latter getting the second-lowest individual score this week, 32pts

The Pigeon Bobbers high-scored with a (relatively) magnificent 112

Devilsweep and Nuttie had another relatively poor week with 92pts leaving them on 2503.

Avit and Pottster were the third team to crack the ton and their 101 leaves them on 2488, just 15 points away from fourth.

Slarty and Viddleodge managed to retain the sixth spot they snatched last week with a 99pt haul which trebled the gap to seventh to an amazing three points.

Yani and Timmsy could only manage a 97, but compared to last week, that was an excellent effort. They end the week on 2419.

Mintman and Weeman spared Talcy and Schlocky's blushes by getting the week's lowest score, 74, with Weeman only managing 30

Finally we have this week's surprise package. Not only did Clammers and Feets crack the ton, but the former hit the week's highest score, 64pts

Been thinking about it...will think about it more after eurovision

Meanwhile, I'll think about the fact that a mere seven hours after I get a phone call saying no beds are available for today and my appointment is cancelled, talcy is on hinting that I put the newly-freed time to good use. Lizard person or what?

I can't see any other explanation for knowing about the long-stay brothel.

I'm fking off to St Andrews for the day instead to play spot the golfwanks. So if you and your fellow reptilians want to arrange a thunderstorm or two, feel free. 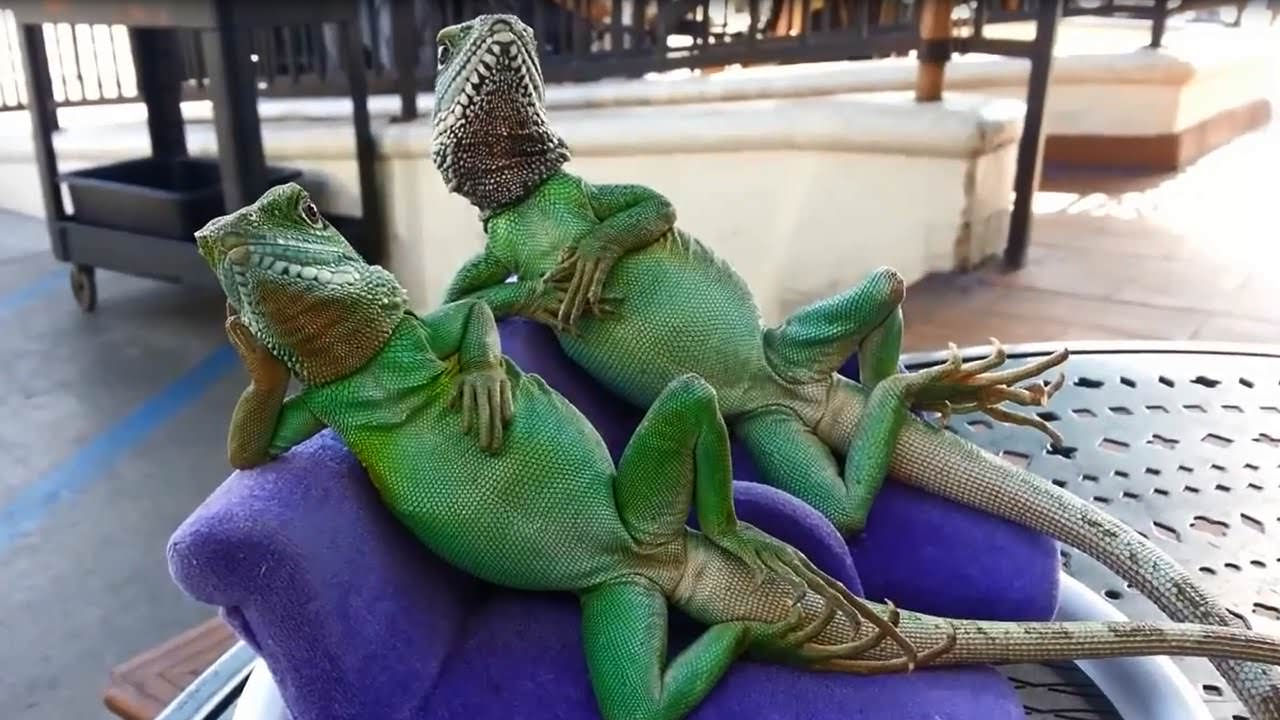 According to the Turkish jury me and Timmsy have won
Top

Well, half of those AFL "experts" did tip you and Zero Hanger made you Nap of the Year

...and Yani and Timmsy start their push

Weekly Roll of Honour
Highest Team Score: The Pigeon Bobbers - 192
Highest Individual Score: Rinky and Sheffy - 106 (impressive, but they only managed to beat one team score

Uneventful position-wise, but three teams high-score and two seasonal records go in one of the last 10-match gameweeks

Slarty and Vid regain seventh spot as one of only two teams to score in three figures
Oher news: The Pigeon Bobbers respond to the threat from the Scheissemeisters by top-scoring in their respective divisions to end up with a mighty 141. They jump two places and take the lead for the first time this season.

Crompton and Rinky respond to The Bobbers' surge last week by finishing in the same position in their respective divisions. Unfortunately they didn't quite get the idea, both finishing as lowest scorers, and absolutely shattered two seasonal records. Talcy and Schlocky take advantage while The Bobbers hit their fourth top-score in five weeks.

No changes, but The Pigeon Bobbers make it five top-scores in six weeks

Clammers and Feets hit two of the week's top three scores to announce the start of their title push and deny The Bobbers a fourth consecutive top-score.

When two of the bottom three are the only teams to reach three figures, you know the week's lamer than Jemima Puddleduck after the landmine Sun Tzu - The Art of Cooking With K-ration Orange Sauce

They've done it again! Clammers and Feets top-score for the second week in three

But wait! What's this? An exciting end to the season? Shirley Nott? Yes!
Those cheating coonts, Talcy and Schlocky, hired the granddaughter of former defence secretary John Nott, to flash her barrage balloons at Yorkie...and it worked! All he could think of was, "38", "38", "38"...and that's what he scored, but enough about Shirley

Going into the final match of the season, the gap at the top is down to
13 points
May the spawniest bastards win.

In other news, Crompton retrieves his crusty towel and hits 2x42 in some sort of weird tribute to gym aficionado Douglas Adams, while Slarty and Vid relinquish their seventh spot to a pair of utter coonts.

and that's yer lot for this week. I'm off to find yet another image host and replace all those lost maps and scores...not that any coont noticed

Week 20 saw only one change in the overall positions. Crompton and Rinky's reluctance to leave Poland allowed Mintman and Weeman to ski down the Italian Alps and up to sixth place.

The best progress this week was made by Devilsweep and Nuttie. They top-scored and struck lucky with direction for an actual distance gain of 148km.

At the other end of the scale were Slarty and Vid who used most of their score getting away from Italy and only got 3km closer to Athens. Not doing much better were Crompton and Rinky who headed towards the Ukrainian border in their hunt for milkmaids and gained only 8km.

Talcy and Schlocky held on to their lead, but the third-lowest distance gain did them no favours, Yani and Timmsy closing the gap to 68km 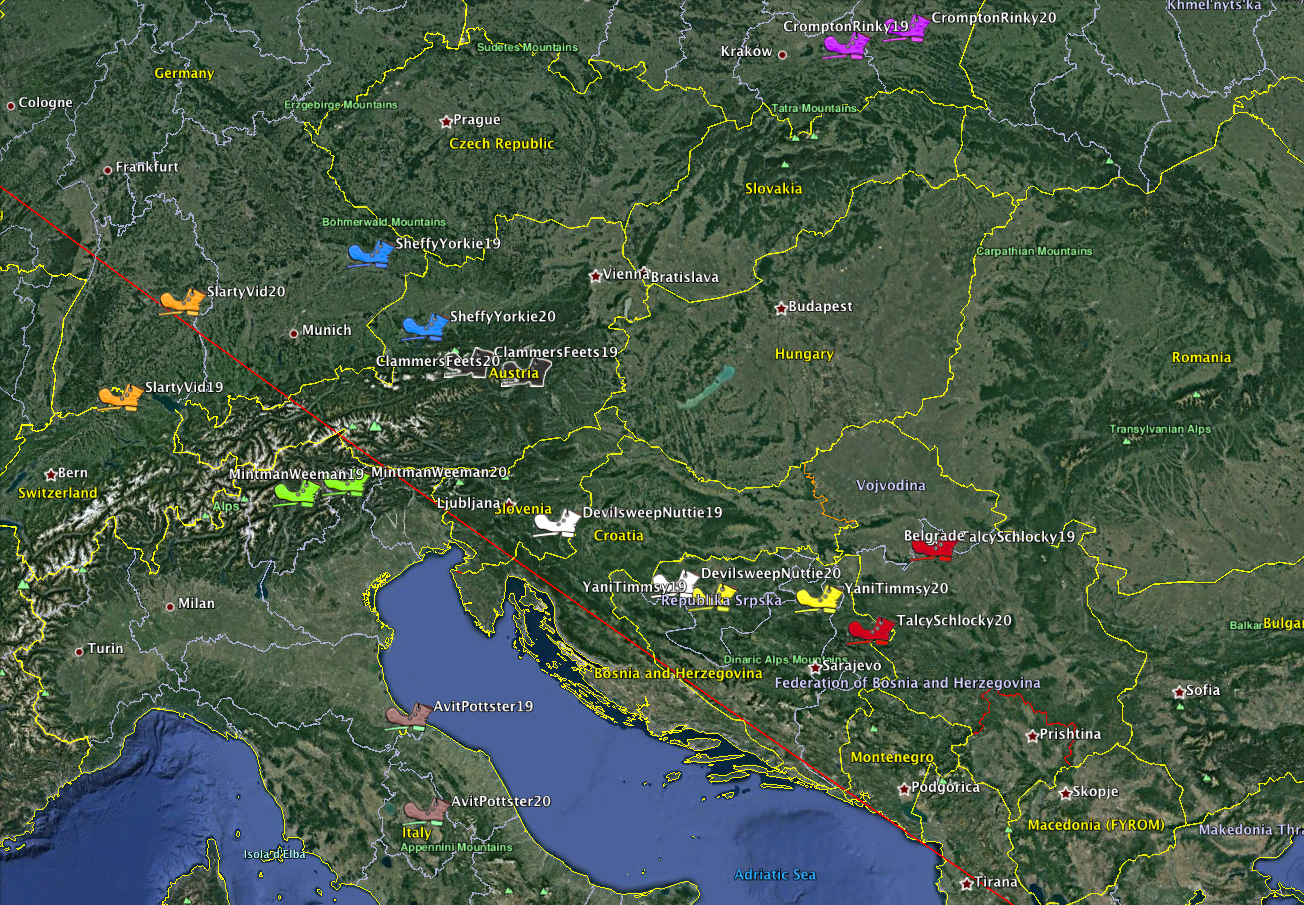 Big news of the week is that Yani and Timmsy's late surge fails to snatch fifth place from Devilsweep and Nuttie by just three points. Making it a double whammy for Yani was Avit, who pipped him for top score by just one point.

In other news, Viddleodge sets a record low for the season. His "null points" won't feature in the seasonal records due to the number of games, but is well worthy of a mention. Sir, I salute you and the duck eggs of your loins.

I'm sure there was something else I had to mention, but I just can't remember what it was.

Oh yeah, that was it

Anyone heard from Vid - not seen him about in quite a while?
Top

Ianovich wrote:Anyone heard from Vid - not seen him about in quite a while?

Ianovich wrote:Anyone heard from Vid - not seen him about in quite a while?

spoke to him last week, he's got a new job and fook all time on his hands
Top

Ha! Just wait until we win the Jarrow march